Is virtual reality the future of online learning? 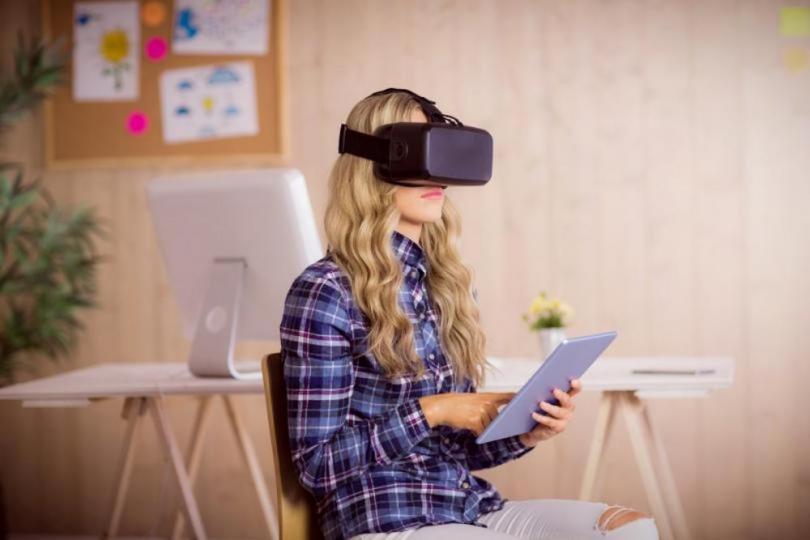 It’s the Fall 2018 semester and a group of anthropology students are deep in concentration, intently studying ancient Egyptian characters scrawled along a tomb atop the Giza Plateau. But there’s a twist: some participants are in a Cambridge, Mass. lecture hall; others are in an East China classroom; and no one is anywhere near […]

It’s the Fall 2018 semester and a group of anthropology students are deep in concentration, intently studying ancient Egyptian characters scrawled along a tomb atop the Giza Plateau. But there’s a twist: some participants are in a Cambridge, Mass. lecture hall; others are in an East China classroom; and no one is anywhere near northern Africa.

With the help of rumii, social virtual reality (VR) software designed by Seattle-based Doghead Simulations, the students — half studying at Harvard University, half at Zhejiang University — were working together as avatars in a VR-equipped classroom. Both camps were strapped into their Oculus Go VR headsets, as Doghead co-founder Mat Chacon remembers the scene, and rumii was “the virtual bridge.”
Everyone’s goggles on, their professors launched the lab and loaded up 3D models of the Sphinx and one of the tombs, which the teams could then grab and move around in the virtual learning space. Other features included live HD video streaming and screen sharing.
“The Chinese and American students just immediately engaged and started talking to each other,” Chacon recalls. “They naturally broke off into groups and started using our drawing widget to circle the hieroglyphs that they would study while they’re in Egypt.”
While the students also traveled to the Giza Plateau soon after their virtual classroom experience, that preliminary gathering sparked meaningful collaboration well beforehand, despite the 7,000-plus miles between them.
“It was just this natural conversational immersive interaction that made their trip to Egypt a lot more valuable because, when they were there, they could hit the ground running,” Chacon says.

The Giza experience wasn’t all that different from Doghead cofounder Chance Glasco’s own VR aha moment. Glasco co-founded the video gaming powerhouse Infinity Ward, but he eventually burned out on the gaming industry and left the company right around the time he first tried the Oculus Rift prototype DK1.
“Wow, [the technology] is finally here, rather than crashing like it did in the ’90s,” he recalls feeling at the time.
Retreating to Brazil soon thereafter, Glasco discovered that VR offered a far more reliable and connective experience with colleagues in the States than video conferencing did.
As for Chacon, he had an inkling that virtual reality might be a formidable classroom tool. He based his hunch on American educator Edgar Dale’s well-known but controversially non-scientific theory dubbed the Cone of Experience, which posits that people remember far more about something through direct experience of it as opposed to just reading, seeing or hearing about it. And early research indicates that Chacon’s instincts about VR were correct. A Penn State University study found that students who used immersive virtual reality to accomplish a task did so more than twice as fast as students who used traditional computer programs.

A BETTER ONLINE CLASSROOM & THE BENEFITS OF AN AVATAR

Social VR applications like rumii may also help tackle the challenge of sky-high dropout rates for online courses by helping remote students feel more connected and less isolated. Last year, Doghead partnered with Full Sail University to deploy rumii in online coursework for the schools’ Game Studies program, with plans to expand across curricula.
Particularly bullish on VR’s promise in this respect, Glasco has “no doubt” that online classes will one day be replaced by virtual reality.
“No one builds memories of online classes,” he says. “It’s just data being fed to your brain in the most boring way possible.”
VR classrooms, on the other hand, give students opportunities to raise their hands, ask questions in an organic way and generally feel more directly invested — as opposed to what Chacon describes as the “pretty flat experience” of traditional online courses.
The virtual setting offers another advantage besides bridging distances and offering more classroom-like experiences for remote students: the comforting semi-anonymity that avatars afford. There’s reams of research about the so-called Proteus Effect, or how a virtual reality user’s behavior might be subtly affected by their avatar’s characteristics. But Doghead claims those alterations have been positive in rumii.
By way of example, Glasco points to Doghead’s recent use of virtual reality to help victims of human trafficking in Southern Florida. He says those who were paired with social workers inside rumii’s virtual space spoke of feeling safer and opening up more quickly inside the space.
“Behind the avatar, [other] people can’t look at their facial reactions and judge. At the same time, they didn’t feel like it was an awkward conversation, like you get in video conferencing. You get the comfort of being in person with someone because you feel present with them. But you feel safe behind a VR headset, behind this avatar, which represents your body language and your audio — but they can’t judge you.”

THE VR IN EDUCATION MARKET 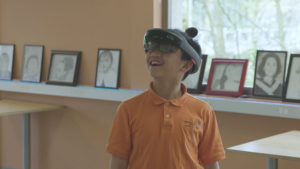 In a recently published survey of more than 900 developers working in AR, VR and mixed reality, a third responded that education is the focus of their current or potential work in the field. Only gaming and non-gaming entertainment scored higher. More than training, healthcare, product design or any other non-entertainment application, it seems education is driving the future of virtual reality.

2018 book about virtual reality Experience on Demand. “The good news is that once they are built, they can be distributed on a massive scale.”
Indeed, Discovery Education has reached millions of students with its virtual field trips, focusing on aerospace (a virtual behind-the-scenes tour of the Johnson Space Center), health (a VR-powered look at the science behind opioid addiction), technology (a multi-part series on agtech) and more. Along with Google Expeditions — a VR app with more than a thousand educational tours — it’s one of the leading distributors of educational VR field trips.
And while the science is still out on whether VR is more effective than other immersive-media learning tools, it appears to hold real pedagogical promise. A recent study by Stanford researchers, including Bailenson, looked at VR field trips about climate change and found that “participants who explored more of the virtual space formed deeper cognitive associations with the science content and could learn, recall and retain the causes and effects of ocean acidification better than those who did not explore the underwater world as much.”
Blue-Fall,” a 1966 painting by Abstract Expressionism pioneer Helen Frankenthaler, is housed in the Milwaukee Art Museum’s permanent collection, but you don’t have to trek to Wisconsin to experience it. Any VR user can virtually zoom in on Frankenthaler’s bold, cobalt monolith — and even listen to author Neil Gaiman play docent as he lends art-historical context and detail.
Gaiman is an advisory board member of Boulevard, a New York-based art-education VR company that brings the museum and gallery experience to virtual reality. Experiences range from a survey of pre-Raphaelite painter Dante Gabriel Rossetti to a sample of Turner Prize winner Grayson Perry’s 2015 solo exhibition. Another notable example of the growing virtualization of the art experience is The Kremer Museum, which arranges 74 paintings of Dutch and Flemish Old Masters in a virtual gallery.

Virtual reality is also helping to better connect tutors with pupils who need extra instruction. Founded by two Cornell students, this Ithaca, N.Y.-based startup pairs students (primarily grades six through 12) with qualified tutors.
UniVRsity (soon to be rechristened Universe) ships Oculus headsets to students to use for the duration of their enrollment period. The company specializes in computer science, but has also worked with students in chemistry, biology and SAT prep. Tutors hold lessons in the company-designed virtual classroom, where they can pull up files and draw on a virtual whiteboard.
Up next? Full classes. This September, in partnership with schools in New York and Florida, co-founder Nicolas Barone will virtually teach an AP computer science class to high school students.
“Online education has to take the next step,” Barone told Built In. 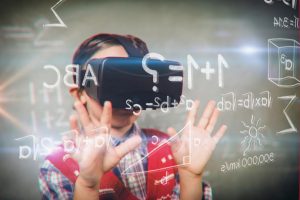 Between 2016 and 2026, the number of STEM occupations in the United States will grow by nearly 11 percent. That’s more than 3.5 percent higher than the rate at which non-STEM jobs will grow, according to forecasts from the Bureau of Labor Statistics.
But state-of-the-art labs where so much hands-on STEM learning takes place can be difficult and costly to access. Labster democratizes the process with 30 different virtual lab environments. The labs — which can be accessed on Daydreams, the VR headset built by Labster partner Google — allow students to culture bacteria, track cellular respiration during an exercise routine, even conduct an ultrasound exam on an expectant mother — virtually speaking, of course. More than 250 institutions currently use the technology, a company representative told Built In.

STEM education begins long before the days of higher-ed lab work. To that end, Lifeliqe’s hundreds of common core-aligned lesson models span chemistry, biology, physics and other science curricula for K-12 learners, all available in interactive 3D or augmented reality. The company, which partners with VR system manufacturer HTC Vive, also has a Hololens extension that — to highlight one example — lets anatomy students open up, rotate and zoom in on 3D organ models. And the company’s interactive VR museum app immerses students in environments ranging from prehistoric nature scenes to outer space.